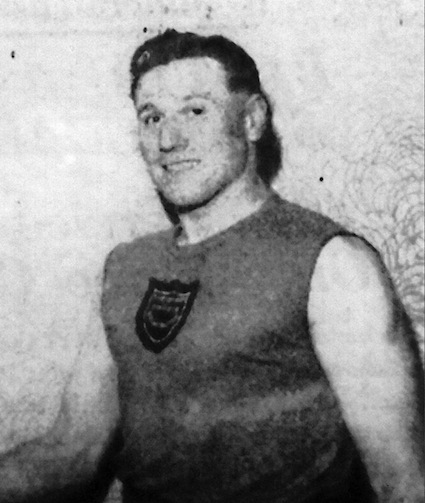 A star on the football fields and just as big a star in the ring. Never beaten on local soil, the undefeated CI middleweight champion and legendary footballer, ever lost only one bout, against Walter Beckett in the ABA finals. A measure of Beckett’s class was that he went on to fight the great Randolph Turpin.

Domestically, nobody could touch this super-fit man, dedicated to his boxing. He fought Jersey star Ronnie Duncombe four times for the CI middleweight championship and stopped him on most occasions. 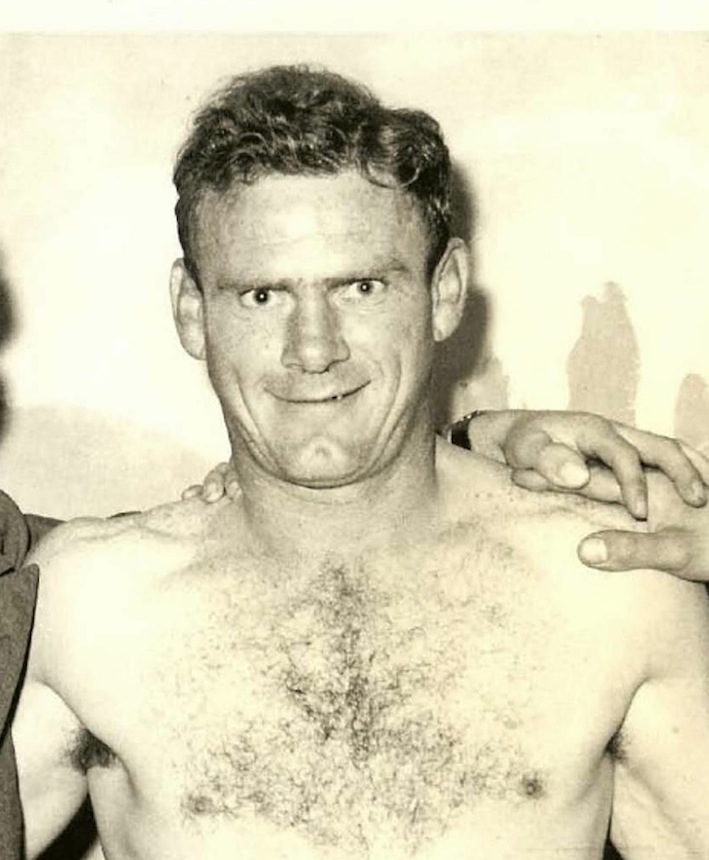 The Matt Jennings of his time and as tough as they come.

A knockout specialist he thrilled StGeorge’s crowds. In 1957 when professional boxing tournaments were revived there and a crowd of 1,300 fought their way in, leaving 200-plus disappointed and outside on the pavement, Veron topped the bill against Wembley’s Danny Wall.

Jonny Veron did his best in front of his home crowd to avenge a recent KO by Wall, but the best he could do was stay the distance with the English pro.

But in domestic amateur terms, Veron was fairly formidable – ‘a formidable hitter’. Les Guille called him – and held the title of island heavyweight champion.

Sadly, Veron’s career will always be associated with the sad death of a local opponent, Len Lorier, who died as a result of a KO punch at St George’s Hall, although no blame can be laid at the feet of the victor. 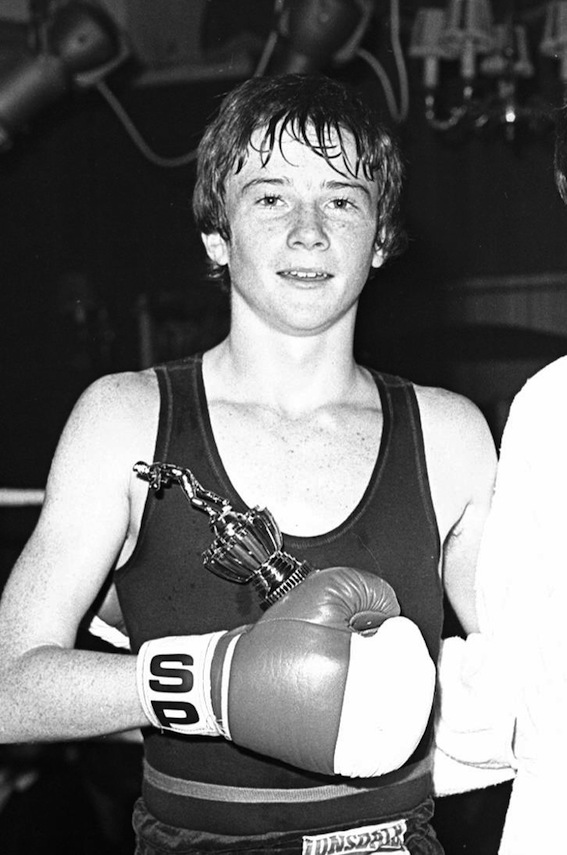 Undoubtedly the most skilful boxer of the modern era and good enough to beat the European junior lightweight champion M. Kulaz from Germany at the Carlton.

Boxed 98 times all told, 36 of them as a senior and with very few defeats. Represented the England schoolboys team twice and the juniors once. He was unlucky to miss out on a second junior cap when the English ABA abandoned a trip to the USA where he was scheduled to box Mark Breland who went on to become WBA welterweight champion.

Good enough also to be matched with the senior ABA champion Terry Marsh, who went onto win the IBF world light-welterweight title before having to retire through illness. 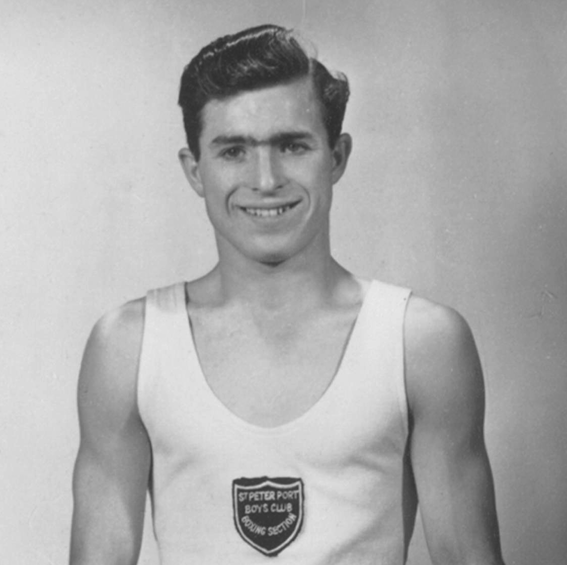 FOLLOWED his elder brother Marcel from their French birthplace in Denain near the Belgian border and was good enough to turn professional. Thought to have fought over 80 amateur bouts before turning professional in 1956.

He boxed as a pro for five years and, although it was without great success, the money from his dozen-plus fights was sufficient to cover the cost of buying a plot and building a family home at L’Eree where his widow still lives today.

A CI bantamweight champion his career was held up for two years as a result of a boxing trip to his homeland. He was forced to do two years national service and he went to fight with the French paratroopers in Vietnam. 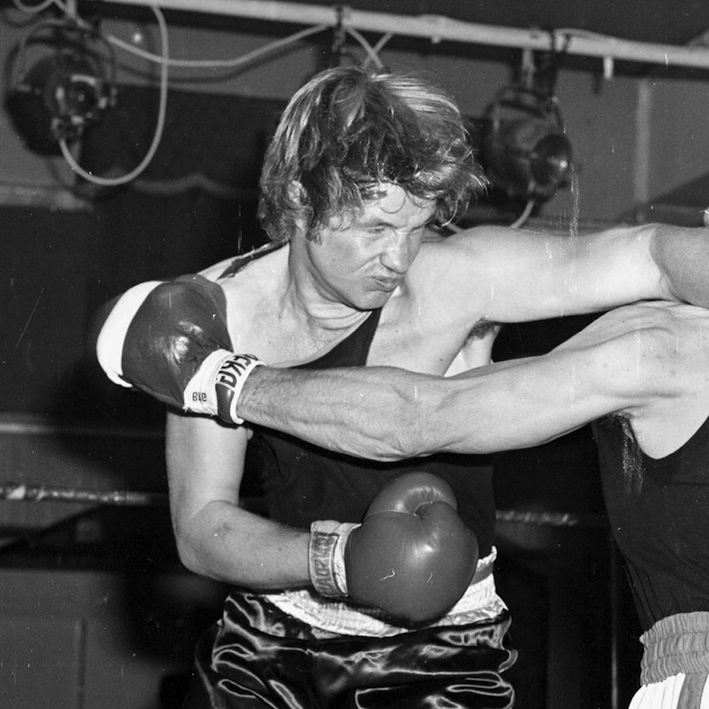 A PULVERISING hitter and brave as they come.

‘He was such a strong lad and a promoter’s dream,’ recalls Matthew Walsh of the Ridunian light-heavyweight who at a Sarnian ABC show at the Carlton beat Harold Hilton who went onto win the ABA

heavyweight title and represent England at the Commonwealth Games.

‘Paul could hit severely with both hands. He wasn’t a clean KO puncher but the aggression meant his opponents were always wary of him.

Good enough to represent England schooboys, ‘Rosie’, as the Carlton Hotel crowds would chant as he ripped into a succession of tasty visiting boxers, always gave full value for money.

Four times he made attempts at landing the national ABA title and on each occasion made the last eight.

Twice he clinched the west of England light-heavy belt and while he lost a few – his final senior record was 45 wins in 60 contests – the class of his opponent was always of the highest calibre.

He lost narrowly to Dietz, the German champion from Cologne, but beat Harold Hilton who went on to win the ABA heavyweight title and went all the way to the semi-finals of the Commonwealth Games.

An openclass boxer he retired to a trainer’s career and is now producing another generation of Ridunian fighters. 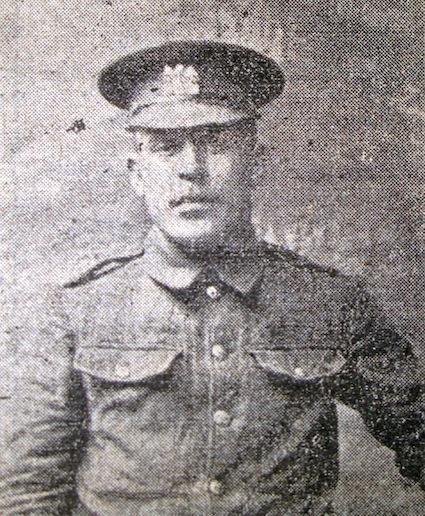 KING of the Guernsey heavyweights.

A century ago Walter Gent was nigh invincible. It is remarkable to think that he held the Channel Islands heavyweight title for at least 15 years, never being beaten.

That reign was either side of the Great War in which he fought as part of the expeditionary force sent to the Western Front in 1914 and survived to fight again.

Little is known about Walter other than he was introduced to the island via his stint with the 2nd Manchesters Regiment, stationed at Fort George in the first years of the 20th century.

But when the Manchesters left Walter stayed and dominated boxing among the big men for a long, long time.

He won the Guernsey title in 1908, defeating Gunner James of the 13th Co. RGA, in a fight scheduled for 15 two-minute rounds at St Julian’s Hall.

Bouts of such length were commonplace at the time, but more often than not big Walt did not need so many even though he started his period of domination while still a middleweight.

Against James he gave ‘proof of his versatility as an all-round fighter and demonstrated his ability to take punishment cheerfully’.

When he took on the Jersey champ years later it is recorded he smiled through the early barrage that came his way.

After a spell in the trenches in the First World War which he was fortunate to survive, by the end of the decade Gent was facing a serious challenge from Jersey in the form of their heavyweight champion, Walter Ralph.

Gent sailed to Jersey for the CI showdown at the West Park Pavilion and won in eight.

Strangely, a year later Gent and Ralph were back in the ring at West Park where this time the Caesarean was ahead on points when the Sarnian star knocked him out in the sixth.

The fight had been scheduled for 20 rounds and was one of three CI title fights.

It is not known what happened to Walter Gent and just how long he ruled the CI rings.

After 1923 boxing virtually disappears from the local media eye.

By then he would have been 36.

The first great Alderney star and the Ridunian treadmill has barely stopped since. Don left for a professional career in London in 1954 and within a few years had climbed into the top five in the British bantamweight rankings.

Boxed an official eliminator against John Smiley in Middlesbrough, losing on points.

A professional for eight years, it is believed he remains the only Channel Islander to have boxed 10 rounds.

Before leaving the amateur circles he twice won the CI bantamweight title in the early 50s, on one of those occasions knocking out Marcel Branquet in the second round at Springfield in Jersey.

Quick and game, the elder of the brothers was an outstanding flyweight of his time – the 1950s.

He was brought to the island by the German forces as a labourer early in the Occupation.

Won both the CI and southwest of England area titles and on his retirement became a judge at dinner boxing.